View cart “Limited Edition Fine Art Print (10 only)” has been added to your cart.

The inspiration for the album cover art

These glorious prints are specially printed to fine art specifications and are H:297mm x W:420mm in size and come unframed. The run is strictly limited to 10 hand numbered prints. Andreas numbers the odd prints and Julie numbers the even prints, and both sign each one. Description below.

This picture is the inspiration for the cover art of the Julie & Andreas album With the Sky in Our Hands – the tangos. The source photographs come from the duo’s time-lapse photography with music multimedia concert performance “Con el Cielo los Manos.” However, it is the impossible interplay between the images, when stacked, that evokes the emotion and wonderment that characterises this art piece. The depth of the working opposites and voids intertwined with the consistency in certain visual lines between the two images maintain a shifting perspective and capture that impossible yet perpetual movement that belongs to the sky, clouds and northern lights – ceaseless.
It seems that Julie & Andreas, with their Scandinavian connection to the Aurora Borealis and their interest in cloud time-lapses, have tried to capture those phenomena together in a single instance here. And it appears strong artistic decision to mount this upon their singular album. This provokes the thought that they have then attempted to emulate those wonders through their audacity in combining harp with bandoneon. Even taking it a step further by initiating the harp into a culture to which it is unaccustomed, just as in the night sky where the stars are unaccustomed to being outshone by the aurora. 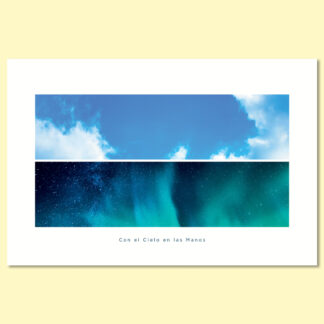